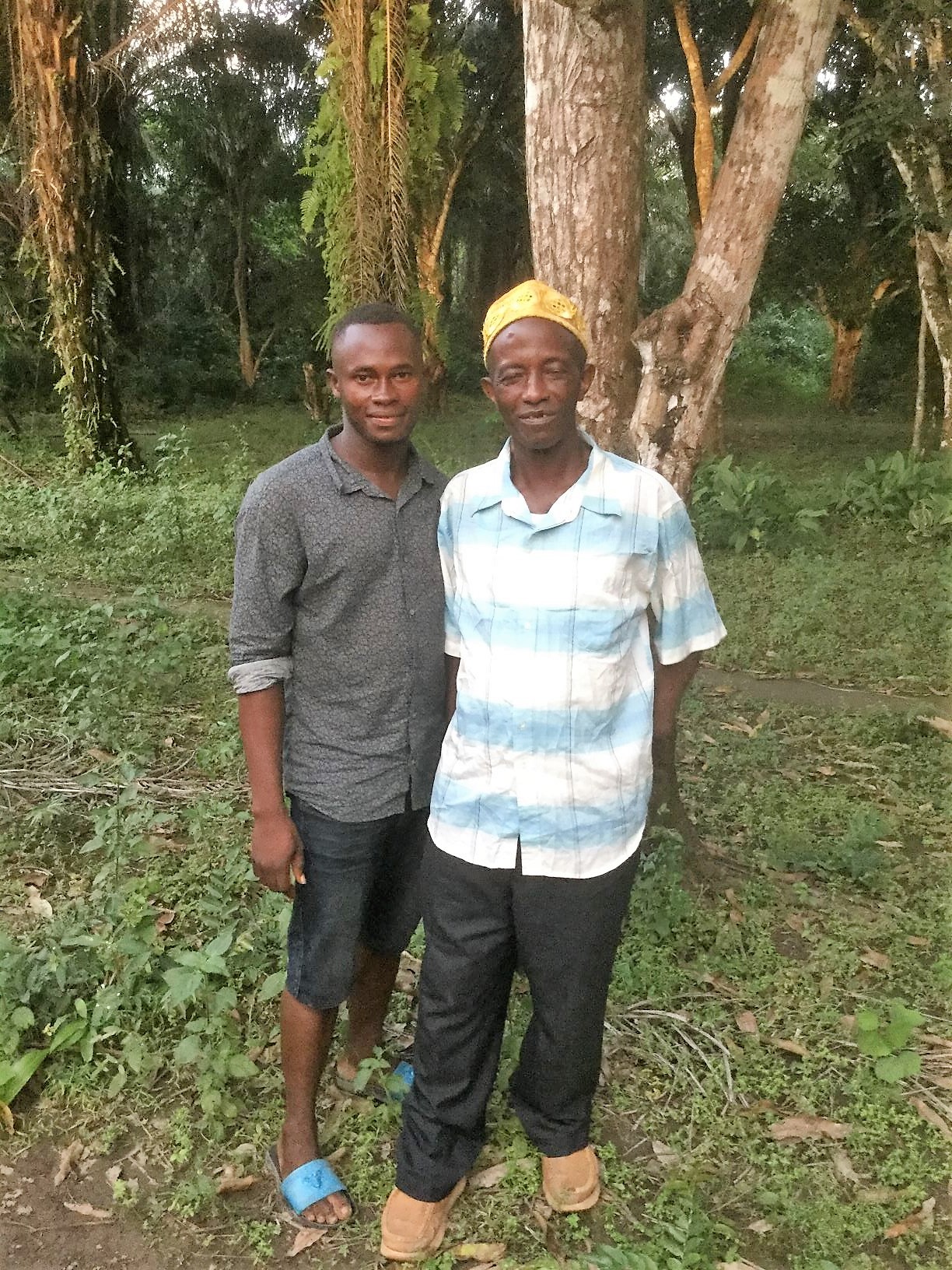 Sometimes when I am arranging a trip to Sierra Leone I think, ‘Why spend this money on flights and accommodation? Why don’t you just put these funds into the ARET fund?’ It would make a lot more sense but then communication with Sierra Leone can be as frustrating as trying to send money there and some topics of communication are just too important.  Kemohkai (Kemoh) is just too important. Kemoh catching up on Maths

We had the opportunity to meet Kemoh during our last trip and at that stage we were still not certain as to whether he had gained entrance to University. The process has been fraught with hurdles. The tuition we had arranged for him went smoothly enough. He was ready to complete the exams for his Senior Secondary Certificate when a General Election was called. The exams were delayed, the election went to a re-run. The exams were further delayed.  President Jules Maada Bio was inaugurated and a further period of time passed to enable the new government to settle. Abdulai made various enquiries and visits to Makeni University and although everyone agreed that Kemoh would have a very high chance of being selected there was no confirmation. He still had two exams to sit and he took the opportunity of our visit to practice the Conversation element of his forth coming English Exam.

In the open air classroom which doubled as a dining area Abdulai and Rachel were discussing some business in one corner and Kemoh and I had a conversation in another. I asked him what he thought about women’s educational opportunities and how he saw the Sierra Leonean woman’s role in the work place and at home. He was very forward thinking and agreed there should be equality of opportunity until it was suggested that only one adult could work as there was illness at home. The woman in the example given had better wages and a better job. Who should work? Who should stay at home? I was curious to see how he would answer. Kemoh hesitated, then said, ‘The man, because African men….’ He was not allowed to finish his argument as Abdulai shot across the room and insisted he had to talk to Kemoh. Kemoh was given a lecture (in English) from Abdulai about the role of the  New African man and his role in the work place and family. It made sense for me to sit back and listen. This was a cultural moment and any input from Rachel or myself was quite irrelevant. It was interesting to listen to as Abdulai made the case for the man taking the role of ‘house husband’ illustrating the importance and honour of the role and the very special relationship which could develop between father and children. Kemoh had little more to add to the conversation but he was very obviously mulling over all that had been discussed.

Before we left to go back to Freetown I asked Kemoh about himself and asked permission to publish his story. He did not give much information as he had grown up in the village and had witnessed some terrible events during the Civil War.  He did not wish to talk about these other than to say he had hidden in the bush for nearly three weeks terrified, thirsty and hungry. I certainly had no right nor any wish to intrude.

We moved on to the years of ebola and how the village went into volountary quarantine. If you left the village you could not come back in. They ate what they could catch and grow. Yet again the village knew terrible hunger. Yet again Kemoh’s education was disrupted. Once the ‘lock down’ was lifted Kemoh returned to school and came close to finishing Senior Secondary when his father died. He had to leave school and become the ‘family elder’ who supported the family. He could only dream about finishing school. As for tertiary education? Well….. ?

Kemoh was travelling to Freetown with us to take the final stage of his exam. We stopped at Makeni University en route to see if there was any further information about his acceptance. There wasn’t. As we continued our journey Kemoh asked Rachel and I about our lives. He was curious about our lifestyle and very surprised to learn that hunger and poverty and unemployment exist in the UK. There were many topics we covered on that journey including racism, bigotry and immigration issues.  I am not sure what shocked Kemoh more; the fact that there were degrees of racism in the UK or the fact that I (in my senior years) lived alone. The latter in Sierra Leone is unthinkable.

Finally we dropped Kemoh off, wished him success and hoped to hear about him soon.

Just a few days ago Abdulai contacted me to say he had paid Kemoh’s University Matriculation Fee.  However this was followed by no communication whatsoever. We found out in a very indirect way that there are problems with mobile internet phone links. These may be sorted sometime soon, or maybe not. In the meantime we assume that Kemoh has gained entrance to Makeni University; we know that the funds have left ARET bank account and will find out in a very roundabout manner when they arrive in the Sierra Leone Account. As Jane, Alpha, Abbas and Abdulai have said, “There has to be trust amongst us. Things are not always straightforward.”

Maybe the occasional trip to Sierra Leone is essntial.